Our story so far…

What we’re about
Mannish Boy MB is a rock and cover band from Stockholm that has been around
for more than ten years. It is the classic set up with two electric guitars, bass and
drums. The unique thing with MB is that we have two powerful leadsingers fighting
about who should take the lead.

The last two years MB has started to write their own material as rock´n´roll land,
we better fly, One of these days…Right now they have a record deal with Roxy
recording at Universal and Spotify.

When it comes to covers they play all the songs you have heard hundreds of other
cover bands played and some of the songs you don’t hear so often. MB was raised by Beatles, Stones, Sweet, Alice, Bowie, Mott, Purple, Thin Lizzy, Springsteen etc. From the Swedish stage they listened to Pugh, John Holm,
Nationalteatern and so on. 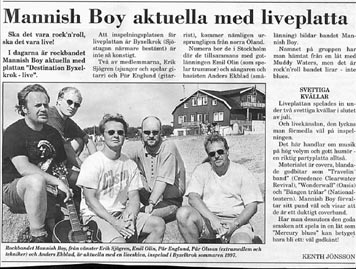 To put it simple MB is all the good stuff from the rock´n´roll scene during the sixties, seventies until today. They love (and still love) Gibson and Fender-guitars, Marshall amps and the sound that comes with that. MB is a mix of all these influences in a 21st
century-package, an experience eprexence that you literally can grasp and feel.

In sweden we’ve played the houses from Åre in the north to Byxelkrok in the south.
In Stockholm we’ve played clubs like Akkurat, Pub Anchor, Engelen etc. Company
gigs: Liber, US Embassy, Computer Associates, Rank Xerox, IFS, DN, Expressen,
Bokningsbolaget, SEB, Telia, UR and others.

The early years
MB was created by three guys in the early nighties. Two of the guys had previously
played in a band from Kalmar called Sound Squad, struggling to get a break with
their own material. It never really took of and died a silent death. Instead MB was
started and burned by earlier hopes, this time we decided to go for covers only.
Two lead singers competing with each other made a great chemistry and after a
few years with a couple of different drummers the true MB was founded in 1997
when the true MB drummer joined the band. It was magic, and there was a success
everywhere. The Sound, The Singing, The Beat, The Guitars, everything was magic
and loved by everyone. The fuzz around MB ”the band that always delivers” spread
fast and since then the band has been fully occupied.

Since a year back MB has decided to write their own songs again. The first song
that was released in 2010 was Rock´n´Roll Land, but there´s plenty more to come.

MB is all the good stuff from the rock'n'roll scene during the sixties, seventies, eighties. A perfect mix of classic influences in a 21st century-package. MB loves Gibson and Fender-guitars, Marshall amps and the timeless sound that comes with that.

If you want us on your club, pub/restaurant, or privat party just send us a message and we´ll be there! Past gigs include; the US Embassy, Computer Associates, Rank Xerox, IFS, DN, Expressen, Bokningsbolaget, SEB, Telia, UR among others. Contact; eriks@comhem.se

Here you'll find classic images and pictures of MB on their incredible adventures through the years.